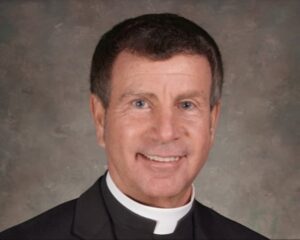 Father Wallace is the son of Robert and Barbara Wallace, one of nine children.  He grew up in Woodbury Heights until the eighth grade when his family moved to Somers Point.  He attended St. Margaret’s Grammar School and Holy Spirit High School.  He entered the seminary in 1977 when he resided at St. Pius X Seminary where he received his bachelor’s degree in sciences from the University of Scranton.  For major theology he attended Immaculate Conception Seminary and received his master’s degree in theology from Seton Hall University. He was ordained a Deacon in 1984 and ordained to the Priesthood on May 25, 1985.  He attended St. Charles Seminary for night classes for a four-year period.  After five years of ministry as priest he was assigned by Bishop McHugh in 1990 as director of Ecumenical and Interreligious Affairs for the Diocese of Camden.  In that capacity he is a member and officer of the Catholic Association of Diocesan Ecumenical and Interreligious Officers, he has served as treasurer and vice president, regional representative, liaison to the National Council of Churches USA, liaison to the Episcopalian Diocesan Ecumenical and Interreligious Officers, Catholic/Jewish Committee – membership in Jewish Defamation League.  In the Diocese of Camden, he helped establish the Catholic-Jewish Commission and a Catholic-Muslim Commission, Ecumenical Commission, Tri-Faith Dialogue, Catholic-Jewish Institute for Understanding, and Tri-Faith Breaking Bread Institute. He has also served as the executive editor for the Catholic Star Herald and has written a column for over 30 years.  He also serves as diocesan historian.  He has served several parishes as a parochial vicar and has served as pastor of Queen of Heaven Parish in Cherry Hill, Christ the King Parish in Haddonfield, and was a co-convener and pastor of the newly merged parish in Wildwood – Notre Dame de la Mer Parish, while also serving as president and rector of Wildwood Catholic Academy a pre-K to 12th grade school. He was happily installed as pastor of Christ the Redeemer Parish on October 3, 2021. 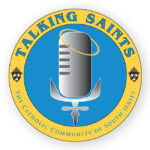